You think your integrity is high? hmmm think again..hehehe 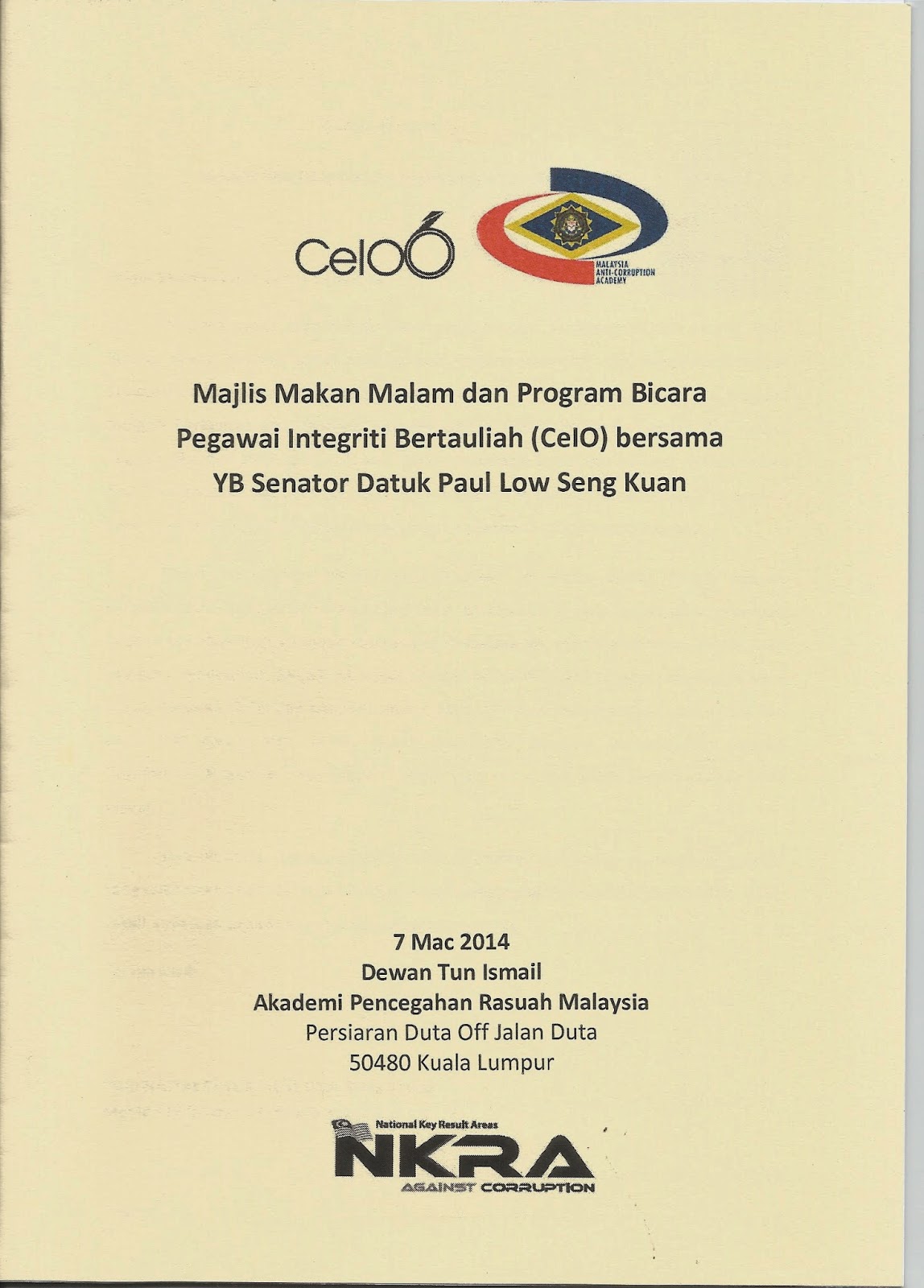 Wow, time flies. Little did I realize I have been resource person for the CeiO program now running into the 6th, 7th (April) and 8th (June) cohorts. It is conducted at the Malaysian Anti-Corruption Academy at Jalan Duta, Kuala Lumpur. My slot is a two hour 'internal management control' sharing of industry experience and some stuff on auditing and risk management and a review of corporate scandals and malfeasance in the likes of Enron et al. This certified program is under the supervision of the Centre for Corporate Integrity Development of MACA and most participants are from the public service, GLCs and some PLCs.

I was a bit apprehensive when it was first introduced. My initial reaction was....why do we need an institute for integrity? Would it not be interpreted or perceived by the world at large that Malaysia is a nation of people with no integrity? haha. We are now seeing the fruits of that initiative. Kudos to Pak Lah as we now see a growing seriousness at the way we look ethics, integrity, fraud and corruption at both the public and private sectors.

The present government is serious at ensuring that Malaysia moves down the scale in the global corruption index. ok ok..I will leave at that. No heavy stuff on a sunday afternoon..hehe. Enjoy the rest of the weekend folks...ciao...
Posted by Khaeruddin Sudharmin at 5:17 PM No comments:

of celebrity ceos and death by powerpoint... 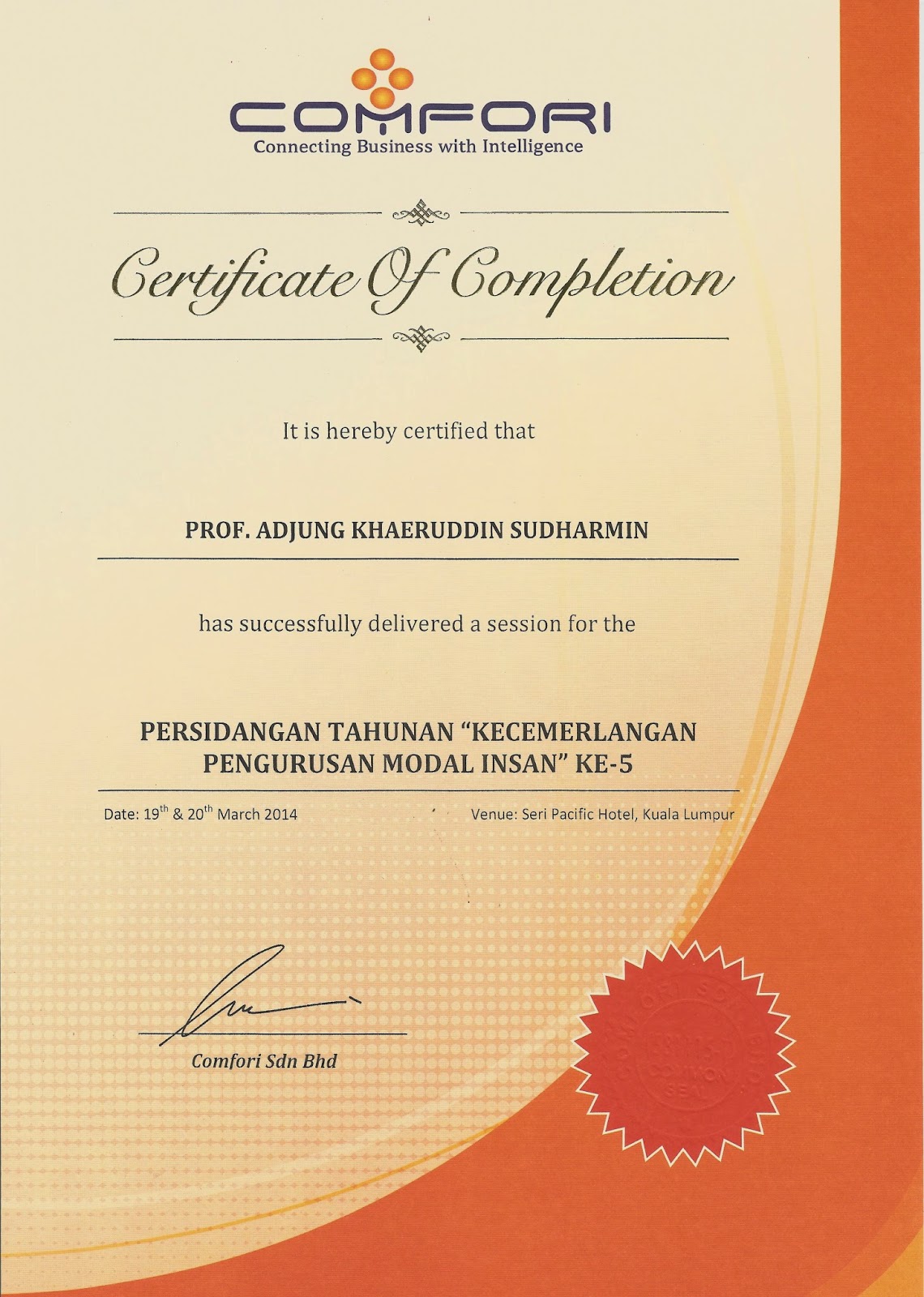 Sorry folks! I have not been blogging, almost a month. It has also been 3 months now since I called it a day as adviser and board member of MRC Malaysia in partnership with THATCHAM UK. The first quarter of 2014 seems unusually crazy for me as ALL weekends in March up to 12th April, are taken up. MBA classes..OMG! (the usual Gen Y expression for oh my gawd! hehehe). Lecturing Strategic Management  cohort 5 at UUMKL and facilitating and tutorials at Asia e University  (Strategic Management, Multinational Corporations (MNC), Corporate Governance & Best Practice and Corporate Social Responsibility (CSR).

Its a nice feeling when after retirement people still remember you and invite you to speak and/or chair conferences hehehe. Last thursday, Comfori, winner of PMSB's best training provider award 2011, invited me to speak and chair the second day (March 20) the 5th Annual Conference on Human Capital Management Excellence (whatever that means..hehehe) at Hotel Seri Pacific, Kuala Lumpur. I didn't realize that the conference proceedings was going to be in Malay...erkk..I told them I am more comfortable if it was in Bahasa Indonesia  (oh  no!...hehehe). And I realized most speakers were doing it ad-lib. With quite a few marching on shamelessly in Oxbridge or Harvard English hohoho. The audience were mostly public sector with a few from the universities.

Among a few favorite presentations, one was from the 'celebrity' CEO of the LHDN or the Inland Revenue Board. Yes, the prodigal phenomena in anyone's life hahaha. In life, there only two certainties - Death and Taxes!  hohoho. Tan Sri was fun, flamboyant  and I wish alot more CEOs both in public and private sectors are like him, fun and engaging, inspiring, motivational yet no nonsense. He seems to engage the Gen Ys quite well. That, my friends, those in HCM..managing and engaging them, are the greatest challenge now and in the future.  I told Tan Sri that he is like Jack Welch..he laughed. Which reminds me what Jack Welch (The celebrity GE former CEO) said: 'When the rate of change outside an organization is greater that the rate of change inside, the end is near...'

The topic given to me was 'Penyediaan persekitaran yang komprehensif ke arah memaksimumkan jana tenaga dan ide serta membentuk motivasi dan sifat kepimpinan dalam organisasi' Wow! that was a mouthful and translated it simply means 'Preparing or providing an environment that can maximize generation of energy and ideas as well as motivating and developing leadership qualities in organizations'. Since my presentation was the last one for the day and since there was going to be another function at the hotel and we were told to finish earlier haha and to spare the poor delegates further torture or death by powerpoint hahaha, I didn't have any slides on (although i did prepare one hehehe). I just told them..eh fellas, all that I wanted to say, had already been said by others the last two days...erkkk...hehehe. I also said, there was a book that read 'leaders don't need powerpoint' hehehe.  Have a nice weekend ya all...