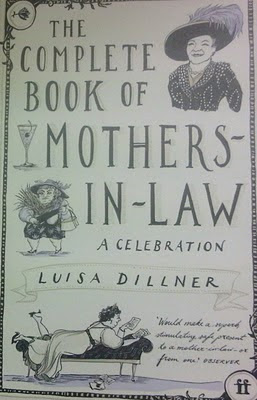 Wherever I am, there's a high likelihood that I will pop into the first bookshop I come across. Yes, at Southampton last week, I saw British Bookshops & Stationers, went in and whoala couldn't resist picking up this interesting book hehe. First published by Faber & Faber Limited in 2008 and this paperback edition first published in 2010.
What with the school holidays and 'mating season' extravaganza right now in Malaysia dan lain2 kawasan yang sewaktu dengannya (wink), perhaps it would not be too much on my part to try and share some interesting insights about mother-in-laws who apparently are perceived almost the same everywhere haha (same same but different..as the Thai imitation goods peddlers are heard saying..in front of the Bangkok Shangrila hahaha).
The Complete Book of Mothers-in-law is written by Luisa Dillner, who now lives in London, originally trained and worked as a doctor in Bristol, a columnist for the Guardian and works for new ideas for the British Medical Journal Publishing Group and has also been contributor to many magazines and newspapers including Vogue, Cosmopolitan and the Observer.
There have always been mothers-in-law and most of us will end up either having or being one. We all, well most of us, have mother-in-law (s) eheh heh...some err more than one actually (wink) and most of us too are either already a father-in-law or a mother-in-law. I am already a father -in-law haha. Just read on please and let's not get emotional or be judgemental hehehe.
Luisa devoted 12 chapters beginning with the essential history of (Mothers-in-law); in different cultures; motherly mothers-in-law; even the Royals and Presidential Mothers-in-law didn't escape her scrutiny (haha); mixed feelings about Mothers-in-law, Mothers-in-law who took a stand; Mad, Bad and Scheming Mothers-law; Mother-in-law-baiting; Racy Mothers-in-law, Mothers-in-law on the Web, and finally... How to be a Good Mother-in-law...hahahaha.
I like her prologue when she wrote about her mother-in-law Maggie. She began '...I can't remember when I first met my mother-in-law and she's vague on when she met me. This suggests that we are not sentimental about our relationship and it doesn't consume either of our lives.' Then she wrote her mother-in-law said 'If you are good enough for him, that's good enough for me.' I like that bit when the author said 'I doubt I will be so laissez-faire about whoever my son embraces as a partner...'
The role of mother-n-law has existed throughout the ages; a part that no one actively chooses and anyone would be forgiven, considering the negative stereotypes, for thinking it has little to recommend it. Mothers-in-law have been variously feared, loathed, ridiculed, appreciated and adored but rarely ignored. The mother-in-law phenomenon is global haha. Historically, the author says you can find mothers-in-law in all varieties: admirable, loving, scheming, bad, divine (literally) and quite ordinary.
Mothers-in-law worldwide are called by different names: the Afrikaans: skoomoeder, Danish: svigermor, Germans: schiegermutter, Italian: suocera, Dutch: schoonmoeder; Spanish: suegra, Turkish: kaynana, Indonesian: mertua perempuan, Finnish: anoppi, Irish: mathaie cheile...but she forgot Malaysian....IBU MERTUA KU! hahahahaha...
When I picked up the book I could not stop reading it. It is hugely entertaining and a most witty celebration of a most complicated relationship, full of anecdotes and amusing illustrations, and didn't leave any mother-in-law sterotype untouched, informative and charming. Go pick your own copy! No no no..I am not going to tell you anymore about it. Can you please let me finish the book now? hehehe
Posted by Khaeruddin Sudharmin at 9:43 PM 1 comment: 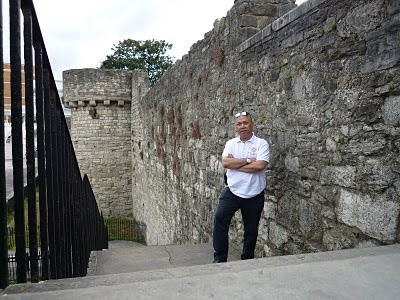 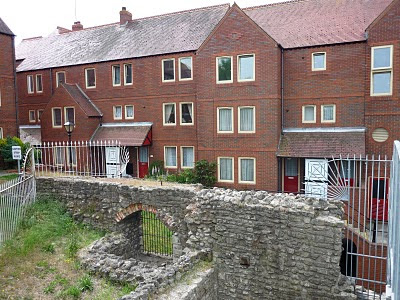 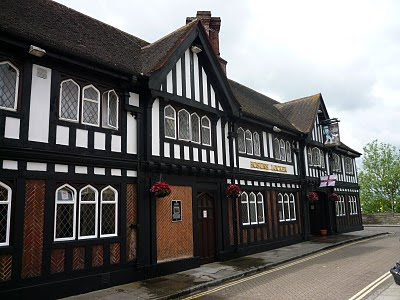 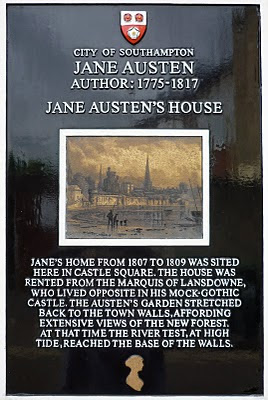 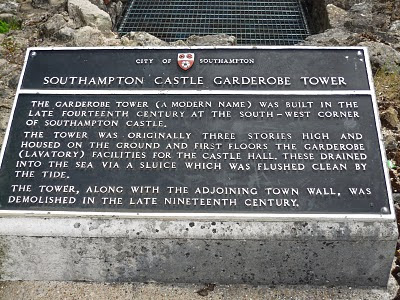 I wanted to find something that could connect Southampton (or Soton) and The Beatles and when I googled..haa this was what I came across written by John T Marck:

" ... John Lennon's song, "The Ballad Of John And Yoko," is that which describes his wedding to Yoko Ono on March 20, 1969 in Gibraltar, and their succeeding "honeymoon," in Amsterdam. Recorded by The Beatles, or more exactly John and Paul, on April 14, 1969, it was released in the United Kingdom on May 30, 1969, and in the United States on June 4. In both releases, its B-side was "Old Brown Shoe", a song written by George Harrison.

John Lennon once said that "songs should be like newspapers," and "The Ballad Of John And Yoko," was just that. Lennon portrays himself and Yoko as victims who were about to be "crucified," and who were turned back at the Southampton docks; who could not get a marriage in France; and who were misunderstood during their "bed-in for peace," as well as ridiculed when they sat in a bag.

In truth, what Lennon did not mention in this song was they were turned back at Southampton not because of whom they were, but merely because they tried to travel into France without passports."

Hmm so much for Southampton. I was last here in 1991 and by the spur of the moment, parked our Volvo 740GLE and caught a ferry to the Isle of Wight. It was already dark when we arrived at the island with no prior reservations. Luckily on board, we met a nice friendly girl who worked for American Express and recommended her auntie's Bed& Breakfast. The rest as we always say, is history.

Talking about history, haaa many of our students studying and living in Southampton, I was told, did not know, cared or bothered to explore the interesting history of this ancient mariner city.

I was in Southampton again last monday morning. About an hour and fifteen minutes drive away from Heathrow on the M3 if it is a good clear jam-free traffic. Checked in at the De Vere Grand Harbour Hotel and whoala...history was just at the back of the hotel.

mindscapes and the beauty of deep thought...? 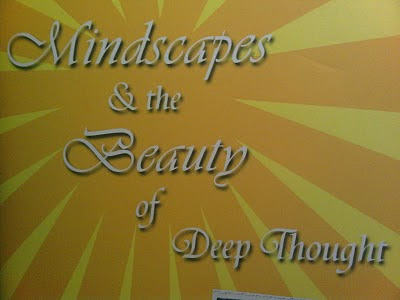 Yes, more than 3 months I have stayed away from blogging. I suspect I have been addicted to facebook and ermm ... perhaps a little twittering too on occasions haha. Datuk Professor Ibrahim Ahmad Bajunid or fondly referred to as IAB (no no not Institut Aminudin Baki..where he was once its director...hehe) never ceases to amaze me.. His usual trademark is knowledge corpus. I am one of those who has and forever will, have great respect for his intellect, leadership and scholarship. To say that the recent award during National Teachers Day bestowed upon him (in educational leadership) was befitting, is to me, an understatement. He should have been conferred much earlier.
My wife and I attended his daughter's wedding ceremony this afternoon at Hotel Singgahsana, Petaling Jaya. The wedding ceremony was elegantly simple. No VVIP tables. Spotted, plenty of Tan Sris and Datuks, Dons, retired DGs of Education etc etc. Everyone queues up for food buffet style haha. Yet it doesn't take away the aura of typical malay wedding blending the traditionalists and modernists. What makes IAB's dotter's wedding different from everyone else is the 88 page souvenir book you get on your way out.
That foto above is that book. Mindscapes & the Beauty of Deep Thought (corak corak minda & keindahan berfikir secar mendalam) published in conjunction with the wedding of aina fazlin ibrahim bajunid & faisal mansor, June 5, 2010. The table of contents began with kata kata nasihat from dad to bride and covers a wide-ranging subject area from the joys of family learning, the making of religious and scientific minds for civilisational leadership, daughters and mums, seekers of knowledge and managers of truth, nautical imagination and education, muhasabah diri, the economic mode of thinking, from monologue to dialoging mindfully, exploring breakthough thinking, life is a long winding road, on life love and death to ozymandias....wow...87 pages to read!
I particularly like the first part where datuk prof IAB advises her daughter: and he began with...cut your fingernails and toenails, clean your teeth and masage your gums gently everyday, clean your ears and the lobes, ensure your ankles and crevises between toes are clean, control and modulate your tone of voice in conversations....etc etc and he moves on to the habits of the prophet and 7 effective habits, to mastering languages , understanding mathematics and geometry, making connections, enjoying poetry and poin-poin bicara where he reminds again about mastering history, championing quality, and that people do not know what they do not know..about 41 points in all haha where he ends it with tipping point, blink and outliers (malcolm gladwell) to homo grammaticus to the building of an enlightened society...wow!
That, is Datuk Professor Ibrahim Ahmad Bajunid. Well done my friend. You did it again. Congratulations on the new addition to the family. I would not be doing justice, if re-activating my blogging, did not start with this little tribute to you prof!
Posted by Khaeruddin Sudharmin at 10:13 PM 2 comments: