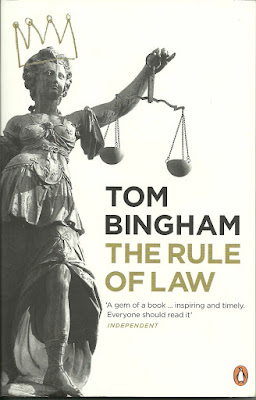 Haha we've looked at a marketing book, an architectural appreciation, let us now get a bit more serious shall we? hehehe. This book caught my attention while rushing to pick up last minute chocolates at Terminal 4 (again?) huhu... What's wonderful about this book is that it's not a law book; its for everybody. It explains, clearly, simply, powerfully, to any audience, what the rule of law means and how important it is to everybody in modern society.
The author, Lord Tom Bingham, 'the most eminent of British Judges' (Guardian), held office successively, as Master of the Rolls. Lord Chief Justice of England and Wales and Senior Law Lord of the United Kingdom, the only person ever to hold all three offices. He became a life peer, as Baron Bingham of Cornhill, in the County of Powys, on becoming Lord Chief Justice in 1996. In 2005 he was appointed a Knight of the Garter, the first professional Judge to be so honoured. He retired in 2008, and in the same year was elected by the Institute de France as the first winner of the the Prize for Law awarded by the Alexander S Onassis Public Benefit Foundation. Tom Bingham died in September 2010, six months after the first publication of this book.
The Bingham Centre for the Rule of Law was established in 2010 with Lord Bingham's support, as part of the British Institute of International and Comparative Law, striving to support the development and strengthening of the rule of law as set out in this book.
The Rule of Law was chosen as a 'book of the year' by Chris Patten, former chief executive of HongKong and Chancellor of Oxford University (in the Observer), Gideon Rachman (in the Financial Times) and Geoffrey Robertson (in the New Statesman).
This book, although written by a former judge, is not addressed to lawyers. It does not purport to be a legal textbook. It is addressed to those who have heard references to the rule of law, who are inclined to think that it sounds like a good thing rather than a bad thing, who wonder if it may not be rather important, but who are not quite sure what it is all about and would like to make up their minds.
'The rule of law' , a much used phrase but little examined. Bingham, said to be one of the most acute legal minds of our time, examines what the idea actually means and made clear that it is not an arid legal doctrine but the foundation of a fair and just society, a guarantee of responsible government, and an important contributor to economic growth.
Of course, we must however be mindful that he examined its historical origins and captured its essence as understood in western democracies today. Closely argued indeed. But then again, you may have a different interpretation.
I am still reading it and I have not put it down...its with me everywhere I go haha....go get your own copy bah! contrary to ' but whoever said law books are an interesting read? this one is!! hehehe ... ngeh3x wink2x dot3x
Posted by Khaeruddin Sudharmin at 7:57 AM 2 comments: 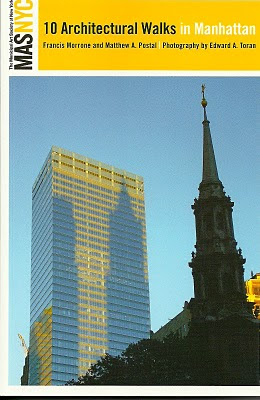 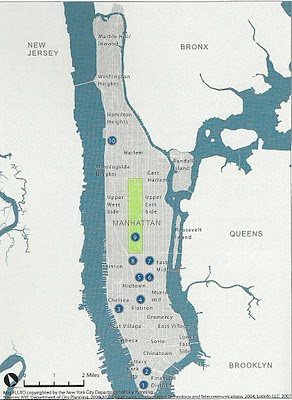 The Municipal Art Society of New York (MAS) a nonprofit, membership-based organization that fights for intelligent urban planning, design, and preservation through education, dialogue and advocacy celebrated its fifty-second year of offering walking tours to the public in 2009. In 2008 more that 10,000 people participated. I picked this excellently illustrated (photography by Edward A Toran) 10 Architectural Walks in Manhattan by Francis Morrone & Matthew A Postal, from the Metropolitan Museum of Art New York counter, at Macy's on 34th street.
No way would I have the time to see and appreciate all the buildings and architecture of Manhattan, so this book would be a great weekend browse haha.
Kent L Barwick, president emeritus of the Municipal Art Society of New York, in his foreword wrote: '...on april 8, 1956, architectural historian Henry Hope Reed led what was not only the first Municipal Art Society of New York (MAS) walking tour but also probably New York's first architectural walking tour for the general public. It was so novel that that the New York Times sent a reporter and a photographer to cover it. The Times's reporter documented the bewildered looks and comments of passersby at the sight of thirty-eight individuals walking along the streets through a spring snowstorm, stopping to look at old buildings. The group was taken for bird-watchers or people in search of rooms to rent. In fact, the hardy tour-takers were part of a MAS effort to build a constituency that would support the preservation of the city's notable architecture.'
This illustrated guidebook takes visitors to the great buildings, spaces and neighbourhoods of manhattan. Highlights include downtown New York for a look at preservation, planning and early skyscapers; Madison Square with its pantheon of nineteenth century sculpture; New York's newest elevated park, the High Line; Art Deco structures in Midtown; the Beaux-Arts grandeur of Grand Central Terminal; modernist structures around Columbus Circle and Park Avenue; the splendour of Central Park; and Harlem's Hamilton Heights neighbourhood.
I wanted to visit New York way back in 1988 when my cousin was then the deputy director of MIDA in New York but it never happened. I had dinner with him the other night with his daughter who was born in Manhattan. Their apartment was not far away from Macy's.
We have no less interesting buildings and architecture, both old and new. From Moorish architecture to modern intelligent ones too. When I was enjoying the architecture of Chicago in 2009, the guide gave tribute and mentioned our Petronas Twin Towers while explaining some of their skyscrapers!
In 2009 I landed in Newark on transit to Chicago. This time around I enjoyed the chats with an Uzbek, Jewish and Russian taxi drivers on the way to and from La Guardia and JFK...haha.. New York never sleeps they say.. Its difficult not to fall in love with New York..a potpourri of ethnicity, truly diverse and multicultural...
Posted by Khaeruddin Sudharmin at 2:28 PM No comments:

soul traders: in for the kill..yet again... 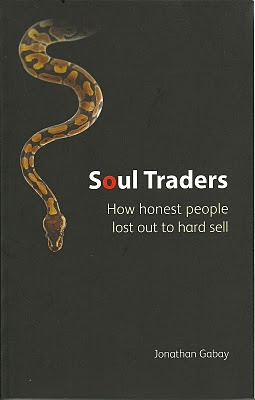 No no no..it's too long. I have stayed away long enough. I need to get back to blogging. Update and carry on from the last one which was about 3 months ago? sheeeshh lest I get trapped in Newton's 3rd law; 'Inertia: the tendency of a body to stay at REST or continue its state of motion' haha. Even if it means my readers (wink) have given up on me or gone away or if my relatives are having a grand feast or barbecue celebrating my departure from blogosphere..har har har...ya rite..
It's too easy..heheh (wink). Ok, to start the mood again, I guess reviewing the piles of books I have acquired since (15 or more I think) from my travels, would be appropriate kot. Quite timely too..what with the upcoming sarawak elections, unrest in the middle east and all..hehe.
This book I picked up at Changi on my last trip to Singapore looks interesting and relevant with the times (wink). It's called 'Soul Traders: How Honest People Lost Out To Hard Sell' by Jonathan Gabay (a lecturer at CIM UK and a marketing reformist). I like his forward remark: 'For all those I have taught and those from whom I am yet to learn.' He takes you on an often-times disturbing journey looking behind a century of billboards, TV ads, campaigns and irresistible slogans (perhaps some porno videoclips too along the way hahaha...naaah i just made that up..huhu) to see how hard sell has captured honest souls. From religion to commerce and politics (see? you need spin jobs and marketing skills in politics too you know?), the psychological tactics used to manipulate public opinion over the past 100 years have become even more devious, for want of a better word (wink). Perhaps ethically and morally wrong are no longer considerations...it's irrelevant to some, so long as the end justifies the means, some would always say, right? wink.
The compelling stories behind some of history's key events will astound you: from who sold chemicals to the Nazis, how public perceptions were managed to win support for wars, how fat cats abused our respect, and the astonishing rise of some of today's best-loved high street brands.
The entire world is undergoing massive change so says the author. Long-held convictions have been replaced with deep-seated cynicism. What will it take for leaders to rebuild reputations and regain faith? Will twentyfirst century digital and virtual communication make us ever more susceptible to persuasion through mobiles and inboxes (you bet..is not the unrest in the middle east testimony enough of the massive effect/impact? hmmmm) or can we embrace the world of hype and maybe learn to get even? Getting even is more like it, I would imagine...embracing? hmm perhaps..wink2x
Jonathan goes on to feed your suspicion that there is more to what you're being told and sold than first meets the eye, or if you're keen to build a profitable and ethical future for your organization through learning from history's greatest lessons in hype and propaganda, then Soul Traders is definitely for you..Go grab your personal copy maaaa... hehehe...and enjoy the rest of the weekend folks! ciao
Posted by Khaeruddin Sudharmin at 3:06 PM 1 comment: