Its almost 9 pm sunday nite july 23rd, 2006. just had dinner and had also just hung up with a dear friend on the mobile phone. I told some friends to checkout my blog and a few were dissappointed cos i only had pictures and no writeups or narration. The photos were just meant to test the uploading...heheh...I haven't really got down to pen my thoughts as yet. Plenty actually, a diversity of issues and observations...both from a global perspective and could come down to really mundane stuff like siti's wedding announcement and the likes for example...(well, mundance to me but big deal to plenty of people i would imagine...heheh). Alot is on my mind right now. The worries...well...concerns really....heheh the Korean nuclear missile tests (which reminds me of the James Bond movie 'Die Another Day'), the israel-lebanon attacks...so sensitive and so delicate...waiting for the superpowers to take sides (remember how the 1st and 2nd world war started??). Closer to home, we read about artists, about reality shows, about PM's reactions to accusations that he being infuenced by his son-in-law etc etc but what caught my immediate attention is the ageless rhetoric about the role of cooperatives in economic development. Having spent a good number or years in the top university cooperative and the top five investment cooperative in the country, i believe i do qualify to make some comments about cooperatives with some degree of authority...heheh.
But before that, right in front of me now, is a table (perpetual) calendar published by Karya Impian Sdn Bhd entitled Suara Hati Dr Mahathir Mohamad. It was given to me a few years ago and I still, unfailingly read the excerpts of the former PM's quips, quotes from his various UMNO general assembly speeches over the years and also from some of his books. I think he is the only Prime Minister who reads and writes hell of alot...and he has not given all that up even after stepping down(heheh). Let me quote today's caption: 'Sebuah masyarakat yang tidak pedulikan waktu haruslah dianggap sebagai masyarakat yang sangat mundur. Apatah lagi masyarakat itu akan terus-menerus menjadi masyarakat yang mundur. Masyarakat itu sekali-sekali tidak akan dapat mencapai sesuatu apapun dengan daya usahanya tersendiri dan sekail-kali tidak boleh bergerak maju dana mengejar peradaban lebih maju yang mementingkan waktu. Pastilah bahawa kegagalan orang Melayu untuk menghargai masa merupakan salah satu daripada halangan yang paling penting untuk mencapai kemajuan.' Dilema Melayu. m.s 194

Interestingly, when I read next week's the edge (it always arrives at my house on sunday), my favourite column 'Radzuan's Reasons', he wrote somewhere that an indonesian friend had commented to him that malaysians are so materialistic that they speak always of money and contracts and not of arts or culture....hmmm soooo very true. Well...that comment is debatable actually...heheh...but i am not about to start a debate on "money and contracts are more important than art and culture"heheh...which reminds me of my schooldays with the lierary and debating society hahaha... nevertheless...i must say that to a certain extent...thats quite true actually...heehee.

Coming back to cooperatives..ah yes...go read the report by booz, allen and hamilton entitled 'cooperative solutions' which gave an overview of the state of cooperatives in europe and their dominance and market share overtaking even the other big names in the private sector. What I like to say is that there has to be a genuine effort at developing a new framework or protocol if you may, to mobilize the movement. Most importantly, there has to be a major structural readjustment involving legislation, regulation/deregulation, structure, culture ...in short there has to be a structured change management...massive re-education both top-down and bottom-up and emulate what progressive (cooperative-driven societies) economies have achieved of course with adjustment and adaptation to suit local conditions and practicess. more in my next blog...heheh...nanait... 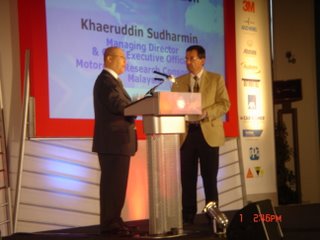 I gave a keynote presentation at the world-renown International Bodyshop industry Symposium IBIS2006 at Montreux, Switzerland, June 1, this year, attended by more than 300 delegates from 32 countries. I spoke on Change Management: Legislation and Technology. Picking up on IBIS chairman's plea for a more structured and joined up approach to legislation affecting the collision repair industry, I outlined the model that had been developed for an equally fast changing industry, the IT and telco sector in malaysia which had involved various stakeholders and had resulted in the successful development of a structured industry protocol incorporating controls safeguarding all sides of the market. i then went on to propose that a similar protocol be developed and adopted by the global collision repair industry. Full IBIS report is at www.ibisworldwide.com
Posted by Khaeruddin Sudharmin at 12:15 PM No comments: 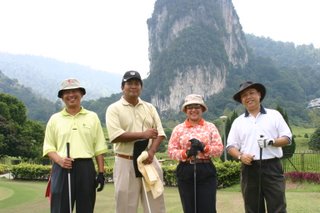 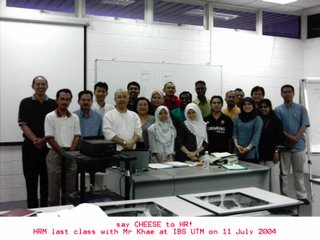 courtesy call to Bapak Sjahrazad Masdar, Head of the Training & Development Board of East Java. I was Dosen Tamu (visiting prof) in January 2006. On my right is Pak Masdar and his assistant, on my left is Pak Made (Deputy Head), and Bapak profesor Gitadi (Head of postgraduate programs at Universitas Airlangga, Surabaya)
Posted by Khaeruddin Sudharmin at 5:47 PM No comments: 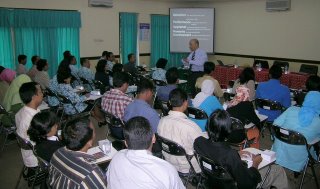 public lecture on HRM/HRD to masters students of Universitas Airlangga, Surabaya, jan 2006.
Posted by Khaeruddin Sudharmin at 5:35 PM No comments: